It reminds you of the ocean, perhaps those bands of colour off the coast of Okinawa where the ocean abruptly moves from the transparency of glass to deep and dark blues. Or maybe the snowy cap of Mt. Fuji set against clear skies. The cloth in front of you is a product of indigo dyeing and so it makes sense that your mind would leap to such beautiful, distinctly Japanese sights. You can see the telltale marks of centuries of Japanese craftsmanship. But, if you were to hold it in your hands you would realise it’s more than that. Japanese it may be, but it’s something more now. Tougher, more durable perhaps? The dye is as long lasting as ever but this material might be a bit stronger than average, as Catherine Quinn of Mottainai told me,

“the linen, is really hard-wearing and that is really important to me, the idea that you know it’s not gonna wear away quickly.”

Catherine works out of Conway Mill in Belfast, appropriately it’s an old linen mill, refurbished in 2011 and home to a variety of artists. On its top floor these days, when she isn’t dashing around the rest of Ireland teaching workshops, you might find Catherine combining elements of the places she has called home, Japan and Ireland, to produce some of the wonderful products at Mottainai.

“I’ve always wanted to see how Irish linen and indigo, the Japanese indigo work together. And when I came back, I went and got some Irish linen from a mill here, and I started using it, … it works really well together with the indigo. Irish linen really loves indigo, it combines beautifully and there’s an earthiness to it.” 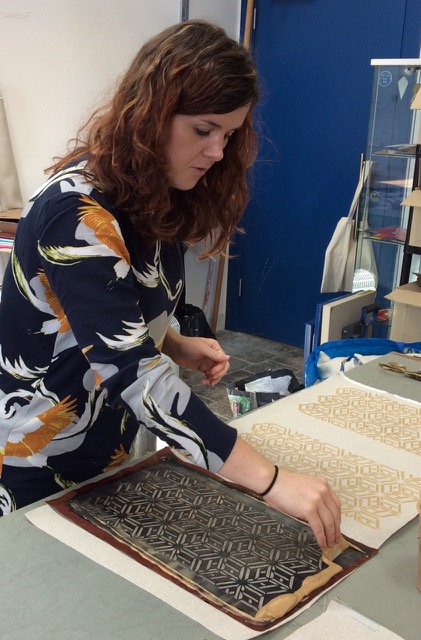 Arriving in Japan after six years in Manchester where she studied textiles and fashion design Catherine found herself searching for a new challenge connected to her interests. After months of searching, cajoling colleagues and inquiring via friends she hadn’t struck upon anything. Eventually a simple google search, of all things, set her on her way.

“I found Bryan and his little house in the hill, just got in contact with him and he was just like yeah come on down and see if you like it; so he introduced me to the indigo.”

Not only the indigo, but the techniques that go into forming those beautiful patterns you see on all of Catherine’s work. In particular she fell in love with Shibori. A technique she now teaches to her own students.

“Shibori is the stitching and folding of fabric, they’re stitched and folded and clamped together or pressed and then when it’s dyed in the indigo, or any colour, …the dye can’t get penetrate into the parts where you’ve blocked off by stitching or clamping and that creates the pattern. It’s kinda cool because you start with a flat 2-D piece of fabric and you make it 3-D and you dye it and you make it 2-D again.”

While Bryan isn’t quite the kind of name one reaches for when one imagines a master Japanese craftsman a brief look at his own website and a few words with Catherine will attest to the fact that he’s clearly as passionate about his craft and teaching as Catherine herself is.

“You get to this little old Japanese farmhouse [according to Bryan’s blog it’s perched on a vertical slope in a village north of Tokyo] … there would be other students there, but he taught in quite a different way than other classes and workshops I’ve done. It was very student led so you come with work that you wanted to do or he would send you home with ideas and people would create their ideas and then come in a week or two weeks later with the new thing they want to make so it was very, ‘I want to do this’ and then he would help you and teach you through that way rather than him have a set plan of how the class was going to go.

It’s an approach that I’m trying to replicate here because a lot of students that are coming to my class are… textiles artists and textile designers already, so they’re coming and learning the skills at the beginning but I’m trying to encourage them to come back and tell me what they want and what they need and the fact that I have an indigo vat running and they’re kind of expensive to set up on your own means that people do come back to me just to use the indigo and just to have me as a guiding hand rather than having a structured workshop.”

After a few years Catherine felt like it was time to come back to Northern Ireland. Yet, it wasn’t such a simple decision. She admitted that leaving behind, sushi, onsen and the Japanese climate would be a wrench but where to go next? Mainland UK or Ireland? A visit home with her mum set her on her path back to the Belfast area. A chance to be closer to her roots after nearly a decade away and the possibility of contributing to the design scene in Northern Ireland clearly held a lot of sway. In particular the opportunity to give something back through teaching appealed to someone who clearly relished her day job back in snowy Gotenba, a small city nestled at the foot of Mt.Fuji, where she had previously been based.

Teaching had always been part of the Mottainai plan, “I knew that it would be because I enjoy it so much,”

However, outside of London’s major Japanophile scene,

Indeed, while teaching continues to make up a great deal of Catherine’s work she also has it to thank for much of the impetus of starting Mottainai itself, including how the company got its name. Catherine had taken a student to a speech contest where one of the participants,

“was talking about the idea of Mottainai and explaining that her grandmother always said it to her and always talked about her younger generation being wasteful and I just thought it was really nice … she referred back to the fact that in the past textiles were never wasted in Japan, nothing was ever wasted, everything was reused.”

It’s hardly surprising it struck a chord with Catherine and it’s a great choice for not just a name but a company ethos. As she noted herself,

“it’s not just about being wasteful for textiles or throwing away things it’s also a far more spiritual thing in Japan where it’s don’t be wasteful of your energy or your life and I just thought that was really nice.”

It was hardly a new idea to her though. Someone who is willing to move to the other side of the planet, to the foothills of Mt. Fuji no less, they’re not exactly afraid of a challenge. Certainly not guilty of wasting many moments in life. Yet, for all the positives one might imagine of living in Japan, it’s probably its challenges that end up being the most rewarding. Even within the support structure of the JET programme you’ll inevitably be encountering situations that cannot possibly be planned or prepared for entirely.

“I think being on the JET programme has given me the confidence to start my own business. It’s always been in the back of my head, but I hadn’t really had the get up and go to do it because you’ve always got this little doubt in your head whereas being on the JET programme and moving to a country like Japan, where you don’t know the language and you don’t know anything… kind of makes you feel very adaptable, like you could take on anything.”

The way Catherine talks about what she’s doing, there’s clearly a real love and passion for it. She talks about indigo and linen in the same way anyone doing something that fascinates them does; there’s a quiet glee in the way she talks about it, like she still can’t believe she’s allowed to do this for a job.

Japan obviously had an enormous impact on Catherine, in the best possible ways. And granted, she may still miss waking up to the daily sight of Mt. Fuji dominating the skyline, but being back home has clearly been a joy, too. She talked, with almost as much passion as when she discusses indigo, about the somewhat unexpected reception at home. Before she left people might have reacted with surprise when she mentioned moving to Japan but now,

“I tell people that I used to live in Japan, they’re like, ‘oh my god that would be so amazing like how much did you love it?’ It seems to be such a flip over compared to what that was like the day I left three years ago.”

And next for Catherine and Mottainai? India one day perhaps, for more of the same indigo and to pick up a few new techniques. Otherwise though it’s hard to imagine Catherine doing anything else, indigo dyeing has very clearly got under her skin. Appropriately enough, that appears to be a membership requirement of the trade.

You can find out more about Catherine and Mottainai at her website http://www.mottainaitextiles.com

One thought on “Mottainai: An interview with Catherine Quinn”